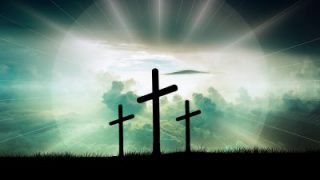 It’s Good Friday today, and in church this morning, the stage has been given an Easter theme with a depiction of Golgotha and three crosses. After looking at this for a moment, I suddenly had a weird thought (not too uncommon for me, I suppose) Why three crosses?
Easter was, after all, about Jesus the Messiah who was crucified during the time of Pontius Pilate.
It is Jesus’ death that brings forgiveness and healing to the world, only Jesus’ death. What place did the other two crosses have?

Well it seems when you look back through the Bible, God often does things with three people, or three types of people. We see this fairly clearly with Abram.
God comes to him and promises to bless him. But God does more than that. In Genesis 12 we read:
Now the LORD said to Abram, “Go from your country and your kindred and your father’s house to the land that I will show you. And I will make of you a great nation, and I will bless you and make your name great, so that you will be a blessing. I will bless those who bless you, and him who dishonours you I will curse, and in you all the families of the earth shall be blessed.” (Gen. 12:1-3 ESV)

If we look at this verse, we see that there are three classes of people –

And attached to these three classes of people are certain outcomes.

Now if we look back further in Genesis we can see this same pattern emerge even right after Adam and his wife were expelled from the Garden of Eden.
Adam had three sons: Cain, Abel and Seth.

Noah also had three sons: Shem, Ham and Japheth. In Genesis 9:25-27, Noah prophesies about his sons.

When we move forward to the New Testament and the arrival of Jesus into the world, we see the same group of three emerge. John 3:17-18 is a prime example.

For God did not send his Son into the world to condemn the world, but in order that the world might be saved through him. Whoever believes in him is not condemned, but whoever does not believe is condemned already, because he has not believed in the name of the only Son of God.  (Jn. 3:17-18 ESV)

So here we see Jesus, God’s Messiah, through whom all the blessings of God will be given to the world.

So then of course there had to be three crosses on Golgotha.

There was no fourth cross.

This site uses Akismet to reduce spam. Learn how your comment data is processed.

Strine is a word probably invented by Monica Dickens back in the 1970s.
It was meant to show how the Australian accent pronounced "Australian". She wrote a book called "Let's Talk Strine" and it gave a translation of the words Australians used into standard British English.
So when an Australian said they had an "egg nishner" in their "Gloria Soame" this simply meant that they had an air conditioner in their glorious home.
Now whilst the book was an amusing little jibe at the Australian dialect, it highlights a fundamental truth about language, viz, that what one understands as being spoken may not be the same as what the speaker intended to convey.
This happens to a much greater degree when the words are being spoken in a foreign language, especially a language that is thousands of years old.
When we try to read the Bible, we need to discover what the original writers meant to convey, not only the actual words, but the images and the logical frameworks they used as well.
This website is a meagre attempt to contribute something to this mammoth task.